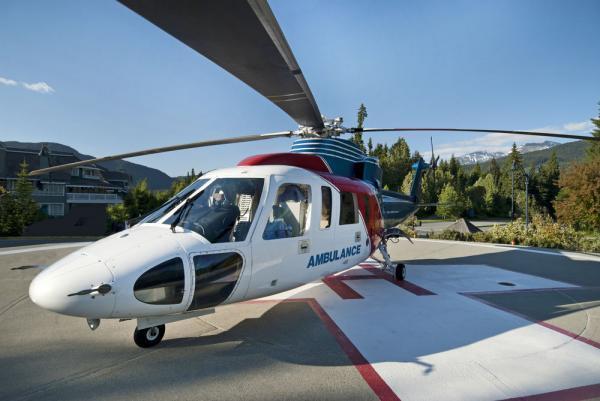 The cutting-edge service began in April 2015 due to a unique partnership between Wales Air Ambulance Charity and NHS Wales, supported by new Welsh Government funding.

21 blood and blood product transfusions; carrying out surgical procedures at the roadside, and ; 82 emergency anaesthetics.

Over a third of emergency calls were to treat heart attacks or patients in cardiac arrest (38%), and one in five missions were to care for patients caught up in road traffic collisions.

In addition to adding consultants to flights, the enhanced service also pioneered treatments and equipment developed from armed forces emergency medical care. That included being among the first civilian services in Europe to carry three separate blood products, permitting the critical care team to provide blood transfusions at the scene of an emergency.

Nineteen critical care consultants and twelve critical care practitioners (CCPs) are flying with the Wales Air Ambulance across Wales, and by using both the air ambulance and road vehicles the ‘flying doctors’ can reach 95% of the population within 30 minutes.

‘It’s been a fantastic year, and I’ve no doubt that there are people living in Wales today that wouldn’t be here had it not been for the care we’ve provided. ‘There have been some incredible cases where the availability of doctors at the scene of an incident has saved people’s lives, and the addition of blood products has been particularly important.

‘Recently we were required to administer blood products at two separate incidents in one day, which is really unusual. Thanks to having quick access to a supply of replacement blood products, we were able to treat both patients and get them to hospital for the specialist care they needed.

‘The ability to reach a patient in 20 or 30 minutes and provide lifesaving treatment gives them a much better chance of survival. It’s been a busy first six months, but we’re all really enjoying the challenge.’

‘The availability of doctors on board Wales Air Ambulance flights has undoubtedly saved lives across Wales.

‘In about half of the cases attended, the team delivered skills and treatments not routinely available outside of hospital in Wales, saving time and saving lives.

‘The new rapid response vehicles have been an additional benefit, when we need to reach patients during adverse weather or after dark.

‘This is an exciting time for pre-hospital care in Wales. The development of our new airbase in Carmarthenshire will be yet another step in building our air ambulance operation, giving our doctors the latest technology and facilities to carry out their missions.

‘We couldn’t do this without the incredible generosity of our supporters.’

The Welsh Government is providing £2.868m from 2015-16 to support the enhanced service. The Wales Air Ambulance continues to rely on charitable donations to raise the £6m required each year to keep the air ambulances flying.

‘The Welsh flying doctors are proving to be a big success, and I’m delighted to see Welsh Government investment is helping save lives.

‘During the first six months, hundreds of people from right across Wales have been given life-saving treatment by highly skilled consultants and a wider medical team at the scene of an emergency, using some of the most advanced medical equipment available anywhere in the world.

‘This has transformed our ability to provide the very best care to the most critically-ill patients across Wales, but especially in our more remote and rural areas.’