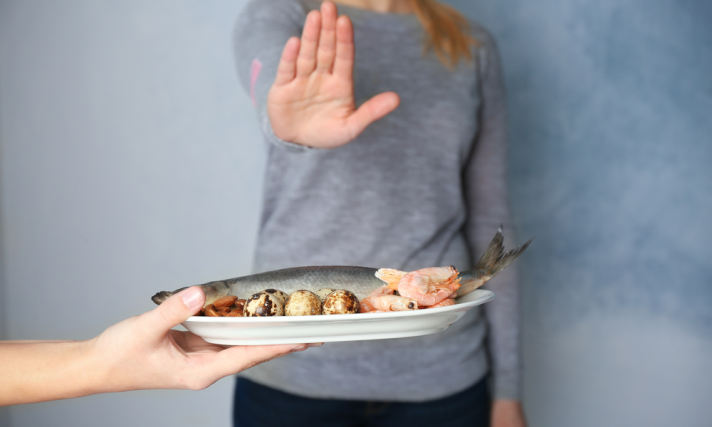 Definition: Pre-occupation with negative details of one’s diet and a propensity to self-diagnose food intolerances or allergies based on supposition or flawed evidence

At a time when we are becoming more fixated than ever before on diet and nutrition,

Britain is turning into a nation of Nutrichondriacs according to findings released today by DNAFit ‘ the UK’s leading wellness genetics company.

According to the new DNAFit study which has defined the Nutrichondria condition, almost half the adult population (45%) state they have a food allergy or intolerance, yet just 15% have had this medically confirmed. For the remaining 30% their self-diagnosis could have a drastic impact on everything from their wellbeing, relationships and bank balance.

The age of intolerance

In recent years, it has become increasingly common for people to declare and self-diagnose an intolerance and change their diet accordingly. The findings reveal one-in-three (32%) British adults now believe that they are lactose intolerant and one-in-four (24%) intolerant to gluten, commonly found in wheat, barley and rye. These figures spike in the 25-35 age group at 37% for dairy and 32% for gluten respectively.  Yet only 5% have had medical diagnoses for either condition.

The reasons why Nutrichondriacs self-diagnose are mixed, varied and rarely scientific. The cause for over 1/5 of people (22%) is identifying with a celebrity who has exhibited similar symptoms followed by receiving advice from a friend or family member (18%), reading an article about intolerance (17%), sudden weight gain (12%) or via an influencer on social media (9%).

With the ambition of helping individuals adapt their lifestyle and diet by showing how genetics can play a role in personalised health, DNAFit dived further into this newly discovered approach to diet. The company’s home-test provides users with a breakdown of their macro and micronutrient needs, identifies potential food sensitivities and offers a guided diet plan based on their genetic pre-dispositions. Providing an award-winning, easy to understand report as well as personal consultations with its team of experts – DNAFit hopes to arm consumers with the right knowledge to tackle the Nutrichondria epidemic head on.

Who is at risk?

According to the study it is the 25-34 age group who are most likely to suffer from Nutrichondria. A huge 57% of people in that age category believe they have an intolerance or allergy at some point, compared to just 28% for those aged over 55.

Over half (52%) of 25-34 year olds also said they would consider following a gluten free diet even if they weren’t diagnosed with any medical reasons to do so.  Yet this would mean cutting out wheat and grains that are proven to have cardiovascular benefits and avoiding popular, social food and drink such as bread, pasta and beer, whilst also paying up to 17% more for gluten-free alternatives[1].

Remarkably the study also revealed that 7% of young Brits aged 16-24 now refuse to eat vegetables in the belief that they are intolerant to them, despite no medical diagnoses.

What is the impact?

Nutrichondria comes at another price: friendship and relationships. One in five people asked admitted they would decline an invite to dine with someone who had a self-imposed food allergy. On top of this, a huge 40% of people have at some point had a meal they prepared snubbed by someone who had self-diagnosed a food allergy.

Indeed, case studies undertaken alongside the report found some participants that had omitted a food group from their lives for over 20 years, only to find they didn’t suffer from their suspected intolerance at all[2].

What is the solution?

With 1 in 3 Brits suspected to be a Nutrichondriac there is a need to help the UK population better understand their bodies to ensure accurate diagnosis. 75% of people said they would consider taking a home test to find out what food they should be eating or avoiding, but 80% have never considered a DNA test to determine this information.

With DNAFit offering a home swab-kit, it is now easier than ever for consumers to receive accurate information that will help them understand their body’s needs and deficiencies.

‘Our Nutrichondria report highlights that whilst it is positive that people are starting to take measures to improve their collective health, worryingly many are making important choices and changes without taking safe advice first. Every one of us is different, and so by understanding our genetics we can unlock valuable insights that give us the best information to make positive wellness decisions.

Everything we do at DNAFit is about empowering people to live the healthiest life they can, by building the most personalised approach possible to their diet. We urge all nutrichondriacs to seek professional medical assessment for if they are worried, or to take a DNA test which will help unlock clarity amongst a sea of fad diets and misinformation.’

Over the coming months DNAFit will be working to raise awareness of Nutrichondria ‘ consumers can visit www.dnafit.com and take a short questionnaire to determine if they are an unwitting Nutrichondriac.