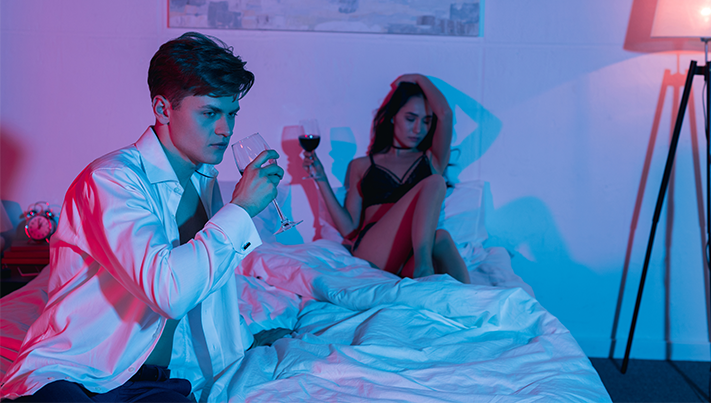 It can seem that sex addiction is the preserve of the celebrity ‘ something that somehow affects A-listers, not us ‘mere mortals’. But that couldn’t be further from the truth.

Sex addiction can affect anyone.

Let’s start by remembering that sex is not only great, but it is also needed and healthy. Some people make it a strong priority, others may experience it with difficulties, and some tend to minimise sex in their life. For most of us, in the middle of this spectrum, we enjoy it as a life and couple activity, with reasonable ups and downs.

Sadly, that’s not the case for an estimated 10-12% of the adult western world population; they are painfully or shamefully on the diagnosable spectrum of ‘sex addiction’ or sexual compulsive disorder. For them, sexual behaviours have entered the scary realm of ‘mental disorders’. Yes, sex addiction is a mental disorder, not just a genital impulse disorder.

For the last thousands of years, starting with the ancient Greek philosophers, we have looked at sexual behaviours from religious, moral, and social grids as Michel Foucault beautifully described it in his ‘History of sexuality’: ‘People will be surprised at the eagerness with which we went about pretending to rouse from its slumber a sexuality which every’thing-our discourses, our customs, our institutions, our regulations, our knowledges-was busy producing in the light of day and broadcasting to noisy accompaniment.’ Over the last century we have allowed science to step into the arena of the Sexual Question. And in the summer of 2018 the UN’s World Health Organisation (WHO), officially endorsed a scientific diagnosis for sex addiction.

Dr Stefanie Carnes recently commented on this break-through in an iCAAD Blog: ‘For years the sexual health field has lacked a legitimate diagnosis for sexually compulsive and addictive behaviour, causing many to wonder, ‘Is sex addiction real?’ Recently, in a groundbreaking decision, the World Health Organization (WHO) decided to acknowledge Compulsive Sexual Behaviour Disorder as a legitimate condition in the latest edition of its International Classification of Diseases (the ICD-11). This important move is a critical first step in de-stigmatizing this common problem. As a result, treatment and research can be advanced and more resources can be developed for our sexually addicted clients.’

Before jumping on the internet to score yourself on the available online scales and self-assessment tools, there are some important points we should all be aware of:

1. For a sex addict, sex operates as a very strong stimuli to the brain – absolutely similar to a drug, a line or a shoot, creating incredible chemical ‘highs’ in the brain. It is a true dysfunction of the brain, often resulting from very sad and adverse early life experience such as sex abuse and abandonment.

2. Sex addiction is not at all about sexual preferences and flavoured practices and surely not about gender preferred orientation and identity. Paula Hall highlighted it in ‘Understanding and Treating Sex Addiction’: ‘It is not the sexual behaviour itself that is the problem, but the relationship to the sexual behaviour’ Sex addiction is not a moral issue, it is a mental health issue.’

3. Sex addiction is not at all about cheating: it deploys very often inside the couple when one of the partners is abusively imposing sex as a condition to the relationship, putting a strong strain on the relationship’s stability and quality, leading to frustration, sadness, arguments and break ups.

5. Sex addiction is not a ‘guy-thing’, the gender spread is stable, slightly in favour of men (these stats are somewhat biased since women talk less about it). However males and females tend to engage in sex addiction with significantly different patterns of gender-specific preferred behaviours. In broad terms, men will often objectify partners, seeking for a quick fix, whereas women are more prone to play relational and sexual seductions and controlling games. Both can provide a  ‘high’. In women this behaviour can devlop into what we call a Female Sex and Love Addiction (FSLA) subcategory of sex addiction.

6. Sex addiction is very often associated or hiding behind substance misuse and other behavioural addictions. Dr Patrick Carnes, world prominent specialist in sex addiction stated in his paper ‘Bargain with Chaos (2006) that 84% of sex addicts present other co-adjunct addictions (and not vice-versa), masking or facilitating sex addiction.

7. Sex addiction is nowadays less and less about physical sexual intercourse: The surge of internet pornography has shape-shifted the traditional expressions of sex addiction. Dr David Greenfield, a specialist in internet-addiction from the Center for Internet and Technology Addiction speaks of ‘The pornification of the internet’ and recently highlighted that 33% of web-traffic is pornographic. The combination of addictive characteristics of internet-browsing and sexual stimuli hits the brain at its core with incredible ‘highs’.

8. Sex addiction is a damaged psycho-sexual state, it requires the help of a specialist, including assessing it. In case of concern or doubt, asking for help is far better than trying to self-assess and self-medicate. It is not easy to talk about it in a consulting room but it is by far the best way to start dealing with it.